So we passed the Inflation Reduction Act. What’s next for climate justice?

Reflections and invitations from Rachel Karasik

In mid-August, amid record setting temperatures, heatwaves, and flooding events, President Biden signed into law the Inflation Reduction Act. The act is the US’ largest investment into climate mitigation ever. These investments will promote clean energy technologies that reduce carbon emissions and make electric vehicles and heat pumps more accessible. The bill can cut emissions by 40%, begin to address environmental injustices, and create jobs. Climate change as well as jobs and the economy are political issues that are priorities for Jewish voters and voters across party lines.

While the face of this legislation from the senate is a seemingly unlikely alliance between senators Manchin and Schumer, it’s momentum was powered by, in the words of our comrades at Dayenu, who can read more about at this link, “decades of organizing led by Black, Brown, Indigenous and low-income communities on the frontlines of the climate crisis, and more recently, by young people.” These grassroots efforts — which have frankly been admonished by leaders and in the media, labeled as histrionic, unrealistic, and not based in science— communicated the urgency of the climate crisis to the American public. This is not about a polar bear floating on a thinning ice sheet in the Arctic.

Climate change is here and let me be clear: if it has not affected you or a loved one yet, it will. In the past year as CJJ has become immersed in climate justice knowledge and activism in North Carolina, I have met climate refugees from California escaping fire seasons that have destroyed their homes. I learned from  North Carolinians fighting fracked gas pipelines from the motels they live in years after hurricanes wiped out their communities. In the aftermath of Hurricane Ida, I FaceTimed my mom as she tried to save decades of family memories now floating in flood water.

This bill is not perfect. It favors the fossil fuel industry, which keeps Black, Brown, Indigenous and low-wealth communities across the country on the frontlines of industrial pollution, racism, and poverty. It allows oil and gas development on public lands. It excludes critical investments in childcare and family care and does not provide a pathway to citizenship for Dreamers, Temporary Protected Status recipients, and essential workers. It does not invest adequately in climate resilience, which prepares communities to respond to the ongoing natural disasters and hazards they are facing today.

So, what is next? Let’s start by celebrating this victory, and acknowledging the Jewish climate movement’s role. Let us then remember that this work is far from over. At CJJ we will continue to invest in shared learning on environmental justice. We will continue to support North Carolina’s League of Conservation Voters Foundation’s voting rights and voter registration work, we will communicate opportunities to support communities affected by natural disasters. 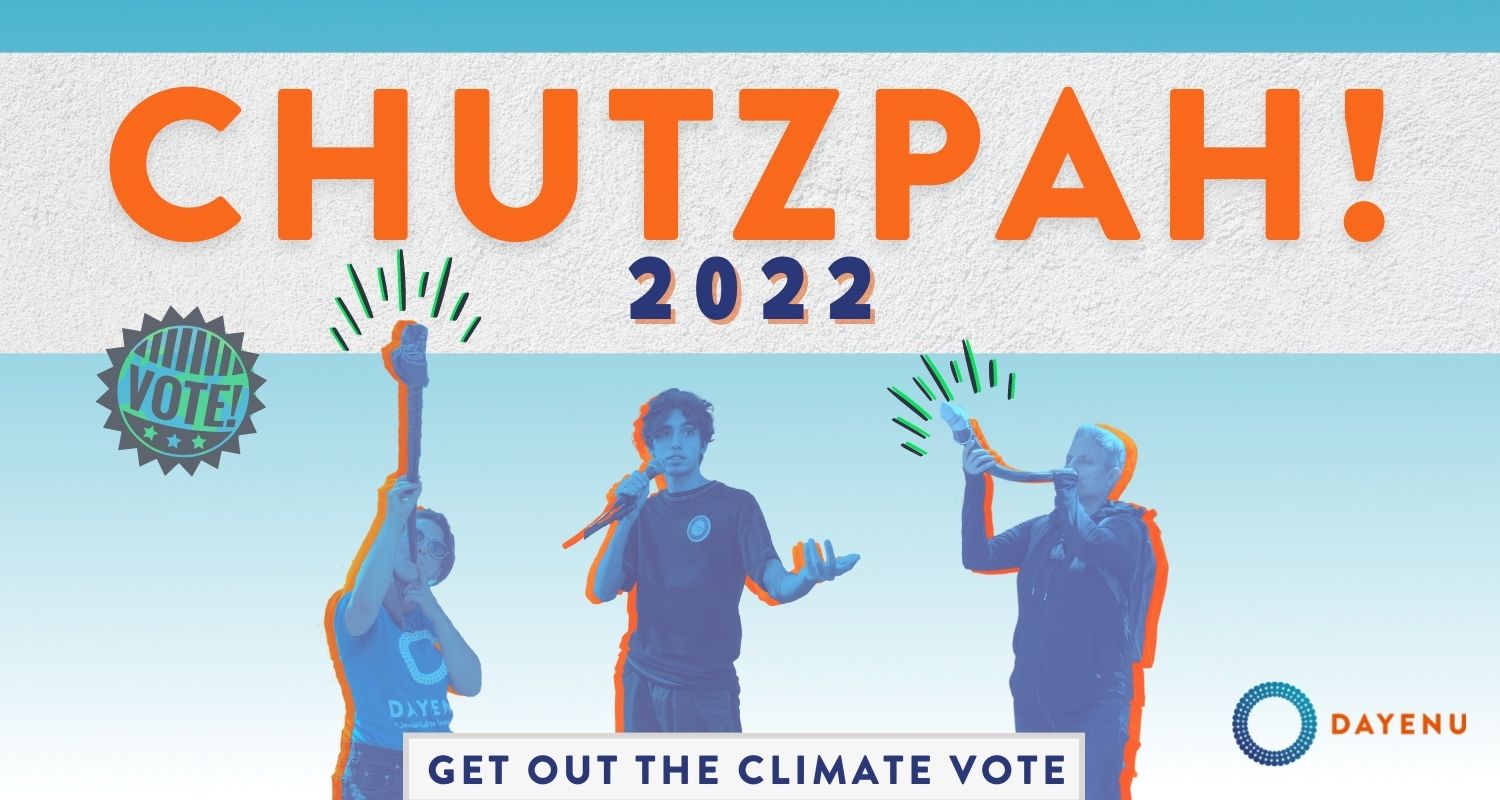 We will also join Dayenu in their upcoming efforts to keep this momentum going and ensure future legislative efforts do not give a pass to the fossil fuel industry. And we hope you do too. We encourage you to take action now in these three ways:

If you want to get more involved in this work, please do not hesitate to contact CJJ-Durham/Orange County chapter leader Rachel Karasik at [email protected]

Voting as an Imperative

Voting as an Imperative
Ron Katz

In a post written by Rabbi Dara Lithwick on ReformJudaism.org titled "What’s So Jewish About Voting", she opens her essay with the following sentences: “Judaism teaches us that voting is not just a civic duty. In fact, many of our rabbis and sages have framed voting as a mitzvah, a Jewish imperative.”

With the midterm elections in November, voting has never been more important. Since Congress is unable to enact federal laws to establish minimum standards for all states, each state is empowered to create its own rules. In some states that has resulted in laws that are characterized as voter suppression.

Another challenge is misinformation or a lack of clarity about how to navigate voting. Questions about the rules for absentee voting, the need for a voter ID (currently, not in NC), and more. Those questions and misinformation can create obstacles not to vote.

Carolina Jews for Justice (CJJ) is a leader in promoting voting. CJJ cannot take positions on candidates or political parties, but it does work to “create a more just, fair, and compassionate North Carolina”. That means CJJ is working to address the challenges to provide those eligible to vote the information they need to do so. To promote voting, CJJ works with many partners to provide opportunities for people to take action.

It starts by all of us:

Should you have questions at any point or want to help promote voting here in the west, contact Ron Katz, CJJ-West’s Democracy Rights work group lead. To reach him, email him at [email protected].

The Jewish Response to Reproductive Justice

• The fetus does not have the status of personhood.
• The full status of personhood and therefore the protections of personhood do not begin
at conception but begins at a viable birth.
• The fetus does not have meaningful status for the first forty days; thereafter, it is
considered part of the body of the pregnant woman until it breathes on its own.
• Termination of a pregnancy is required if a mother’s life is at risk, the risk. This can be
understood to concern her physical and mental wellbeing.

In Summary: (interpretations by NCJW)

If the injunction is removed, abortions will still be legal in the first 20
weeks of pregnancy or in a medical emergency, unless new legislation is passed by
the General Assembly and signed into law by the Governor.

Before Roe v Wade, abortion was illegal in most states. One of the most effective responses, was
the creation of the Jane Collective, started by Heather Booth (https://www.heyalma.com/a-brief-history-
of-the-jane-collective/), a Jewish woman. Officially known as the Abortion Counseling Service of
Women&#39;s Liberation, it was an underground service in Chicago, Illinois affiliated with the Chicago
Women&#39;s Liberation Union that operated from 1969 to 1973, a time when abortion was illegal in most of
the United States.

In 1973, the Supreme Court held in Roe v. Wade that the constitutional right of privacy implicit
in the Fourteenth Amendment’s Due Process Clause protected a woman’s right to choose
abortion. In Planned Parenthood of Southeastern Pennsylvania v. Casey, decided in 1992, the
Court clarified that the right to have an abortion could be exercised at any time before viability.

Taking Action:
83% of Jews support abortion – more than any other religious group.
Abortion action is a matter of religious freedom. We as Jews must act on our teachings!

Join Carolina Jews for Justice to expand access and support!  See the Reproductive Justice page on the CJJ website.

Elections and Voting Rights 2022: What You Can Do Now

This is our last chance to Get Out the Vote! If you are thinking of supporting specific candidates, go for it! But please consider the value of voter outreach with nonpartisan organizations.  These groups often know best how to reach people of color and young people and may be better equipped to connect with voters who don’t identify with either major political party or are turned off by partisan politics.  This guide gives you information about the nonpartisan organizations active in North Carolina. Take a look and then sign up!

If you’d like to take action together with others in CJJ, contact one of our Voting Rights groups. If you have questions or would like to talk with someone in order to figure out how to get started, contact [email protected].

FIVE things to know about casting your vote:

Races on the ballot include:

The Status of Abortion Law in North Carolina

On May 2, 2022, Politico published a leaked draft of an opinion in Dobbs v. Jackson Women’s Health Organization, Case No. 19-1392, now pending in the United States Supreme Court. The draft is authored by Justice Samuel Alito and apparently represents the proposed decision by a majority of the Court to overrule both Roe v. Wade, 410 U.S. 113 (1973) and Planned Parenthood of Southeastern Pennsylvania v. Casey, 505 U. S. 833 (1992), the seminal cases establishing and clarifying the constitutional right of reproductive choice. The draft, dated February 10 of this year, does not reveal who besides Justice Alito would join in the majority opinion or who would dissent, but the draft’s authenticity has been confirmed by Chief Justice Roberts. According to Politico, a confidential source “familiar with the court’s deliberations” says that Justices Thomas, Gorsuch, Kavanaugh, and Barrett voted with Justice Alito in the Court’s initial conference after hearing oral arguments in December.

If the draft becomes the decision of the Court, what will its effect be in North Carolina?

The health and safety of our community remain our utmost priority, and after extensive research and consideration, CJJ is updating our policy for in-person events. The parameters for in-person events are detailed below, and align with most recent CDC and NCDHHS guidelines.
Read more
Posted by Cole Parke-West May 05, 2022 12:09 PM
Share
1 Reaction

On April 24, veteran voting rights attorneys Leslie Winner and Hilary Harris Klein joined us for a conversation about the struggle for voting rights in North Carolina, past and present, and how we can be engaged in this critical work now. You can view the recording of this powerful dialogue on YouTube. 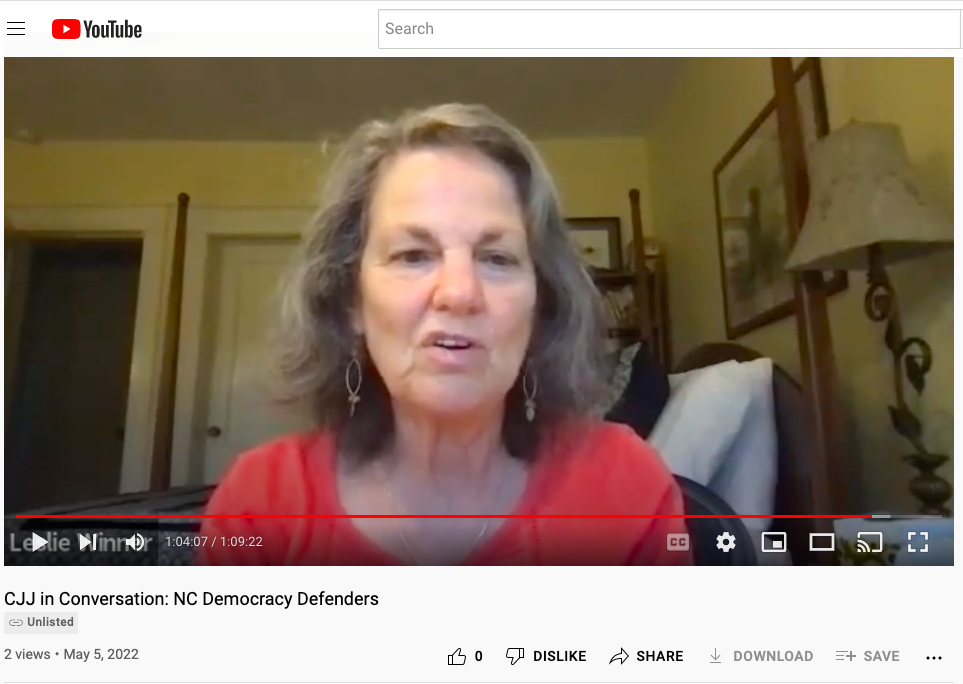 On May 1st (May Day!), many CJJniks and other Jews from across the South gathered at Asheville's legendary Hard Lox Jewish Food and Heritage Festival - hosted by Congregation Beth HaTephila.  The Festival was an incredible opportunity for Southern Jews "from the hills and hollers" to come together after a long hiatus due to the Covid pandemic.  The energy was celebratory coupled with a desire to take action to defend and expand our multiracial democracy! 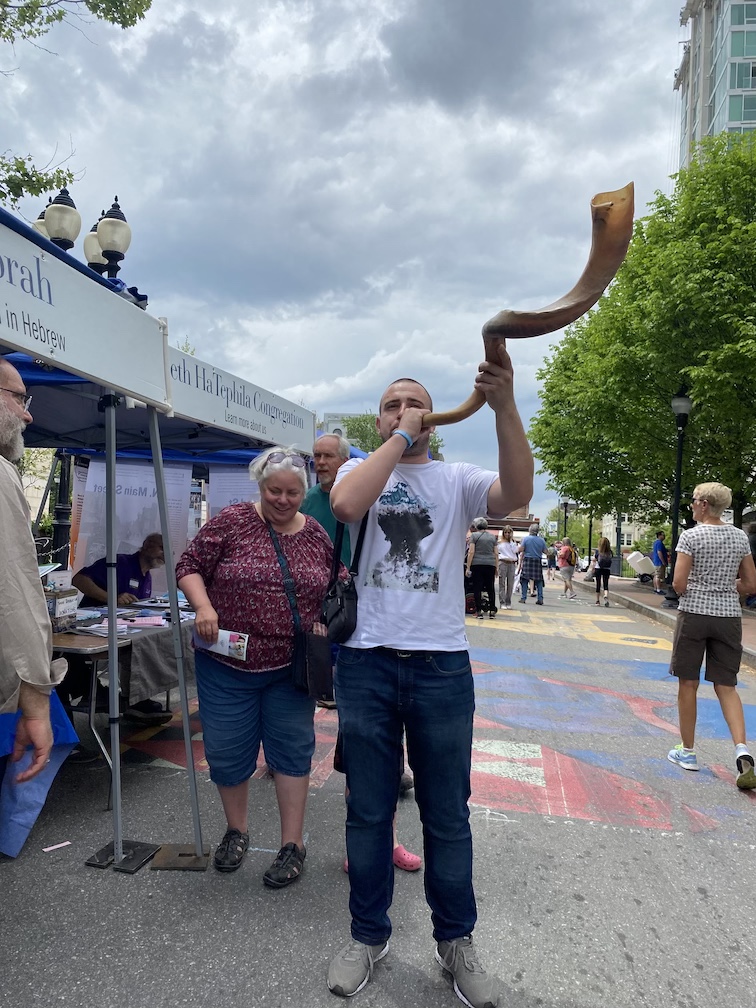 Marilynne Herbert met this wonderful young man who arrived in Asheville two weeks ago from Odessa, Ukraine.  He was very moved to connect with Jewish community.  The feelings were mutual, as we shed some tears while he blew the shofar. Please introduce yourself if you see him around town, wearing his new CJJ blue t-shirt. 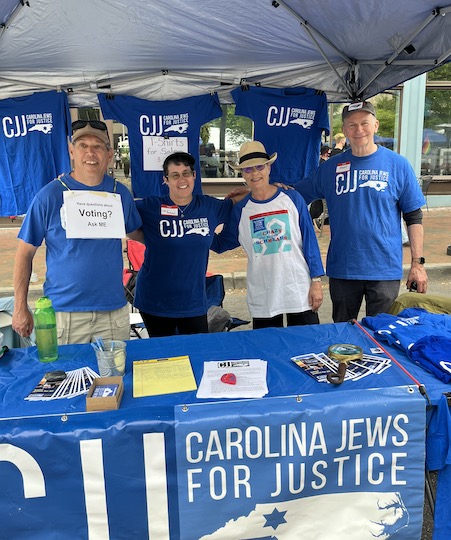 We met people from all over WNC and beyond, and were inspired by their eagerness to engage in the Jewish tradition of enacting greater justice for all.  CJJ is thrilled to have such a positive response.  We shared hard-copy voter guides (you can access another guide via the League of Women Voters website), as well as a list of upcoming CJJ-West events.  It was amazing to be together again, and we look forward to more!

Statewide Study - The Wilmington Coup of 1898

If you had a similar reaction to us in January of 2020, you were completely glued to your phone or computer as you watched an organized white nationalist formation take over the US Capitol building - intent on inspiring fear, violence, and stopping democratic process.

Here is the thing: it is of vital importance to remember that we’ve seen this before. In this country. In our state. As Black and Brown progressive political power is built, there is a violent white political reaction. We know this from post-Reconstruction America. Look no further than our own state for one of the most violent white supremacist coups of that time, Wilmington, NC in 1898.

Led by board member Ray Katz and organizer Brandon Mond, our statewide community gathered on January 19th - the day before Inauguration Day - for a political education program on the Wilmington Coup of 1898. You can read more about this day in Black history at this link or by watching the recording of our virtual gathering below.

CJJ’s response to January 6th, aside from continuing to take action to defend our democracy, was to call our membership into a collective study of this history. We must take a hard look at the past in order to move strategically now, and build a better tomorrow with our Black and Brown siblings.