This post, which was originally an email, started as a simple invite and campaign update but evolved into me sitting with some tough questions about the Jewish community’s legacy. Thanks for those of you that choose to join me on this path.

I’m celebrating wins no matter how small they may seem in this time of tragedy and impossible decisions. You may be wondering what the abolitionist raid on Harpers Ferry and the Black Panther Party (BPP) have in common: both are marked in time the weekend on October 15-17, 2021. The formative political organization BPP was founded on Friday in 1966 in response to police brutality against the Black community, specifically the killing of Matthew Johnson in San Francisco. I am celebrating the legacy of the Black Panther Party, whose Free Breakfast for Children Programs became a model for the Fed Up Political Food Distributionin which many CJJ members are currently engaged.

On Saturday, we stepped back further in time to mark the anniversary of the 1859 abolitionist raid on Harpers Ferry. I am celebrating John Brown and company’s brave attempt to take over the United States arsenal at Harpers Ferry, VA (modern day WV) in an effort to initiate a slave revolt across the Southern states. The raid, now seen as a prelude to the Civil War, included 21 additional abolitionists — 14 white and 7 Black. Brown, a white man, was defeated in the raid by a company of the U.S. Marines led by First Lieutenant Israel Greene. Greene, a Jewish man, later left the USMC and served as an officer in the Confederate States Marine Corps during the Civil War.

I’m familiar with Jewish communities celebrating our shared legacy of engaging in tikkun olam or social justice projects. While this heritage of building a more just world is worthy of celebration, I haven’t heard much introspection about a different part of our story — the one in which some of our ancestors fled persecution based on our Jewish identity in Europe, and then essentially traded in their otherness for whiteness. If we understand the Confederacy as a project of maintaining white cultural hegemony, I see First Lieutenant Israel Greene as having chosen assimilation as a survival strategy. The project worked so well for him that he became deputized as a crusader for white dominance.

While I condemn Greene choosing comfort over building a more fair world, in contrast I celebrate the community that we are cultivating within CJJ. We create and allow space to interrogate these nuances while writing a new story for ourselves, one in which we show up as vibrant, dynamic Jews in multiracial, intergenerational, and cross-class coalition within our Southern communities.

The People's Budget NC, which you can read more about at this link, is an example of one of these coalition spaces in which CJJ is engaged. I am celebrating coalition members Surena Johnson and Kathy Greggs who recently led direct actions in Raleigh and Fayetteville respectively, demanding more resources for those experiencing the current housing crisis. Activists camped out overnight on state property demanding greater transparency into the Emergency Rental Assistance Program (ERAP), wanting to know why neighbors facing impending evictions hadn’t yet been approved for funding. I’m celebrating the team in Raleigh who called in help from a local council person after hearing from a neighbor experiencing homelessness that the portable bathrooms available to the public downtown hadn’t been serviced in weeks.

Additionally, in direct response to this day of action, the city council moved to provide more administrative support to the vendor facilitating ERAP that will undoubtedly increase the capacity of the program to meet the needs of our people. I’m also celebrating that the direct action team was able to motivate two apartment complexes to start accepting ERAP funds, preventing the impending eviction of three families who were approved for funds.

We know there is more work to be done and I'm celebrating our community that doesn't shy away from this necessary challenge.

This week’s parashah is Noach, which is ironically fitting, because this shabbat is also being observed as Death Penalty Sabbath by Christian and Jewish congregations in North Carolina.

Why ironic?  I am not going to discuss the familiar stories of the flood, the rainbow, the tower of Babel.  Rather, I am struck by these two verses that appear in Chapter 9:

But for your own life-blood I will require a reckoning;

I will require it of every beast;

of man, too, will I require a reckoning for human life,

of every man for that of his fellow man!

The sage Hillel taught, "Al tifros min hatzibur. Do not separate yourself from the community." That is interpreted by many as a declaration that Jews should vote as one element of their participation in their community. Historically, Jews have been one of the segments in the US population to turn out greater than others. But voting only works if the votes count. How might our votes not count?

As we approach the High Holidays, we often focus on the life we are leading and what we need to change. What mistakes have we made and more importantly what new actions we should take in the New Year? Most of us have lists of both types particularly for our personal lives, but have we considered what we might do to better our community? Here in Western North Carolina one way to address that is joining the fight to eliminate inequity and racism in the Buncombe County and Asheville property tax codes, which place an inordinate burden on people of color.

By fortuitous coincidence, this year Labor Day falls on Erev Rosh Hashanah, a time of internal and public moral reckoning and our vows to do better in the coming year. The Asheville-based nonprofit Just Economics each year urges congregations of all faiths to observe the sabbath before Labor Day as “Labor Sabbath,” to lift up the plight of workers and act faithfully to seek justice for workers.

From the global pandemic, to racial and political strife, to the politicization of health protection measures, this year has highlighted existing injustices for workers in an unprecedented way. Millions of workers face unemployment, lack of healthcare and paid medical leave, the threat of eviction, and unsafe working conditions. Small businesses have closed, reopened, and may have to close again, throwing their owners and employees out of work. Essential workers are putting themselves in harm’s way for less than a living wage, and the impacts of racism are devastating for workers of color. All this, while the stock market soars and many large companies and executives thrive.

How will we pledge to do better for the working people in this nation? What do our Jewish values have to say about that?

Assembled below are some of the best nonpartisan organizations that are working to promote voting and increase voter access and transparency here in North Carolina.

If there are others that you think should be added or if you have questions, please contact Cole Parke-West or Ron Katz.

Earlier today, I got my first real-deal haircut in over a year, and I feel GREAT! It was such a relief, not only to put my head into the hands of a trusted (and masked) professional, but also to be in a queer-affirming space — in addition to asking how I wanted my hair styled, my hairstylist asked me what pronouns I use, and was kind, respectful, and affirming throughout our interaction. 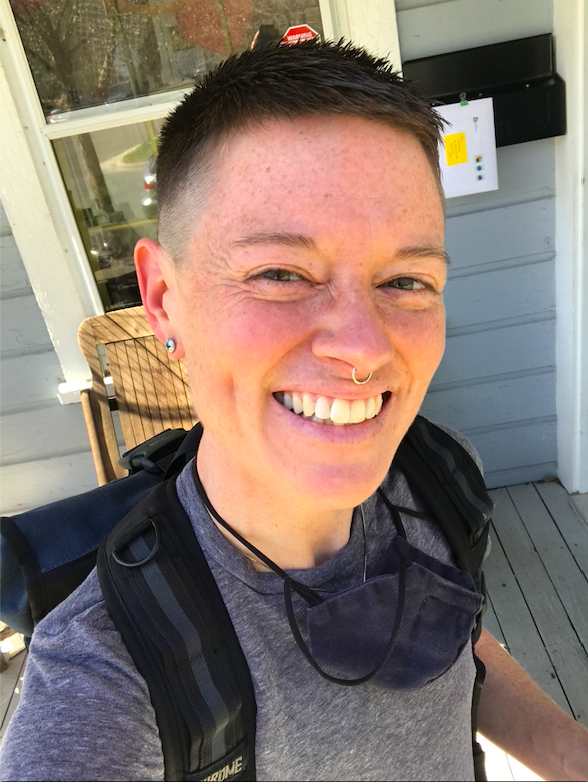 As a queer and trans person, I don't take this kind of experience for granted, especially in parts of the country where LGBTQ people aren't protected from discrimination.

Praised are you, Lord our God, sovereign of time and space, who releases the imprisoned.

Fairness, mercy, and compassion are at the heart of Judaism’s approach to criminal punishment.  Thus we begin the traditional morning service with the birkhot ha-shachar, the morning blessings, which include praise of God for releasing those bound or imprisoned.

The birkat ha-gomel, thanking God for saving us from danger, is recited not only when we have recovered from serious illness or returned from a long journey, but also on the occasion of being released from prison (B’rakhot 54b).  (It is not because the imprisonment might not have been deserved; Orthodox siddurim translations candidly thank God “who bestows goodness upon the guilty.”)

The Torah, while sanctioning punishment for the guilty, admonishes us to remember their humanity; excessive punishment is forbidden, “lest your brother be degraded before your eyes.” (Deut. 25:2-3.)  The offender is still our sibling.

The following op-ed was published in the Asheville Citizen Times on Sunday, January 17, 2021, authored by Deborah Miles of the Jewish Community Relations Council of Western NC, and David Hurand of Carolina Jews for Justice.

The Western North Carolina Jewish community had been looking forward to having a constructive dialogue with Madison Cawthorn, our newly elected congressional representative.  We had asked for a meeting date and were awaiting a response.  Now, however, after witnessing his role in the January 6th attack on the U.S. Capitol, we have decided that our differences are beyond the pale of conversation. We are instead calling for his immediate resignation as Representative of North Carolina’s 11th Congressional District. 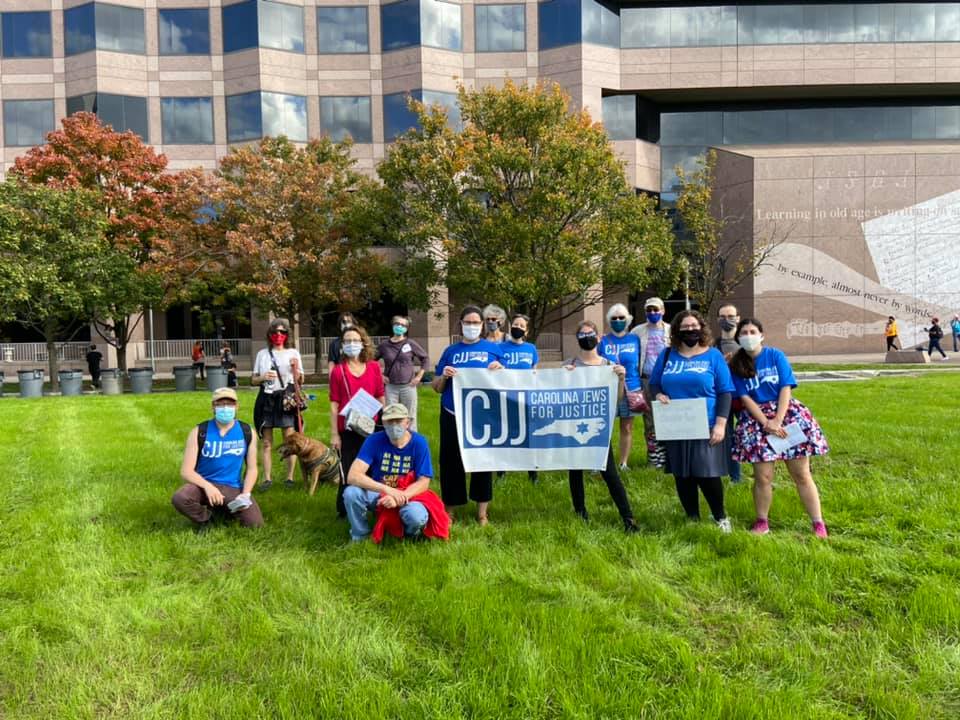