CJJ Board President Meredith Cohen (she/her) made the following announcement on January 12. 2022.

How We Respond to Antisemitism

The following message was sent out to Triad-based participants of the Antisemitism Listening Project from members of CJJ-Triad. We believe strongly in this powerful message in response to blatant antisemitism. It has been lightly edited by staff for context.

Last week during Chanukkah, the CJJ members of the Durham-Orange County Chapter celebrated the winter holiday with a performance of the Ladino language song "Ocho Candelikas". You can enjoy the song performed by chapter members Susan Cohen and Peter Goldberg below.

"Ocho Kandelikas" ('Eight Little Candles') celebrates the holiday of Chanukkah and was written by the Bosnian-born composer Flory Jagoda in 1983. The song is sung in Ladino, a language derived from Old Spanish, and describes a child's joy of lighting the candles on the menorah.

Lyrics for the song can be viewed at this link.

Reflections on the American tradition known as Thanksgiving

During this week of the American federal holiday known as “Thanksgiving” I spent time heeding the call of Indigenous community connection and - yes, even Indigenous content creators - to seek out truth telling of their people and the history of this land. My conclusion of the truth is that genocide and mass displacement happened here.

Thank You Judy and Frank

You are not obligated to complete the work, but neither are you free to desist from it.
Rabbi Tarfon, Pirkei Avot 2:21

Carolina Jews for Justice’s founders Judy Leavitt and Frank Goldsmith have shepherded the organization from its humble beginnings in 2013 to the robust state organization it is now. We are enormously grateful to them for their vision and leadership, as they have worked tirelessly to establish a Jewish grassroots network working towards a just, fair, and compassionate North Carolina. As they step back from their leadership now and transition to new revised roles, they share their wisdom about CJJ. 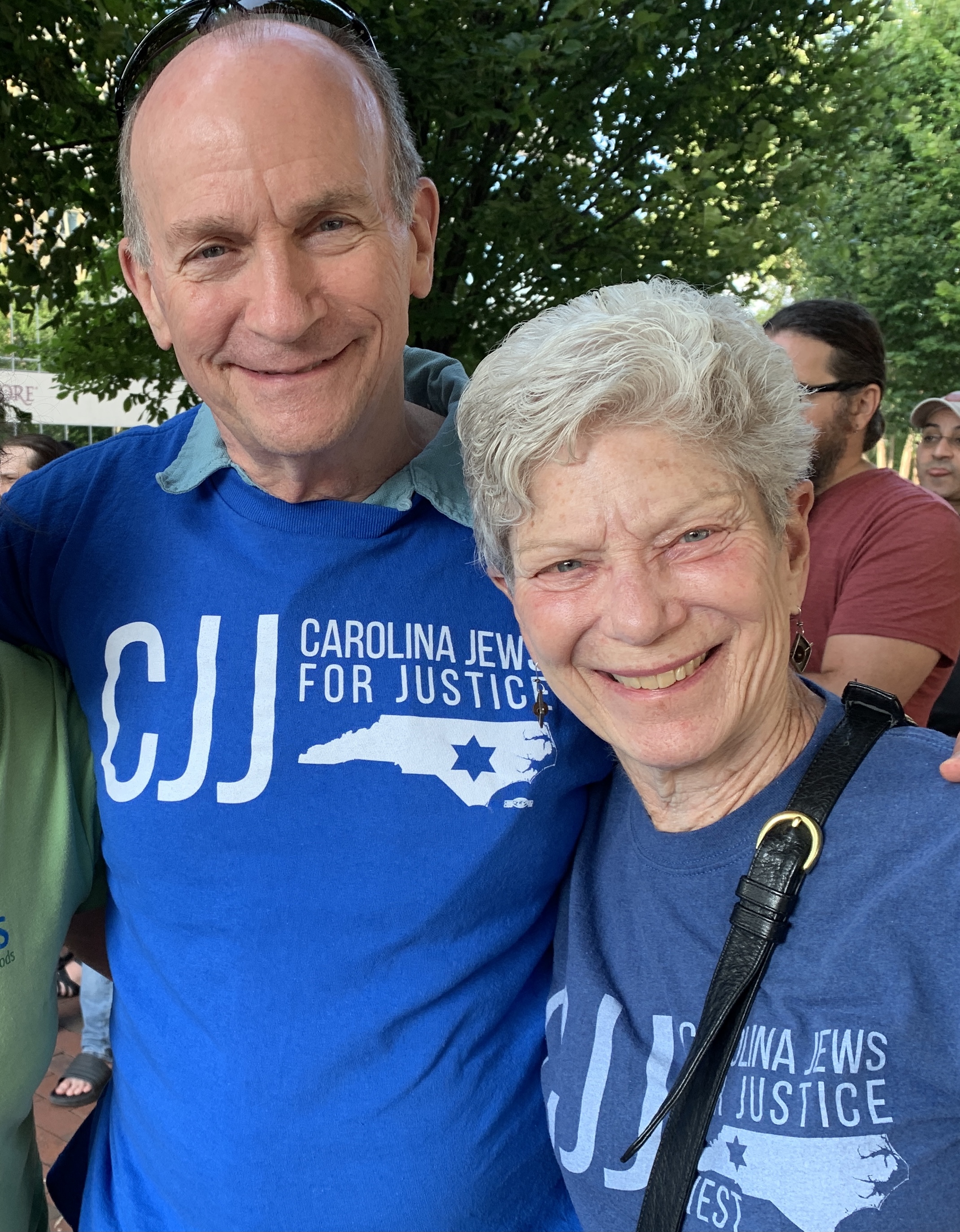 Songs of Hope and Justice

CJJ and Jewish for Good members recently shared in some joyous rest together over Zoom between Shabbat and the week. Members were led in Havdalah by Neshama Littman, and heard some Yiddish folk songs from Jane Peppler. Local singer-songwriter Jess Klein closed out the night with some original tunes. Enjoy!

An Interview with DeWayne Barton of Hood Huggers International

This post, which was originally an email, started as a simple invite and campaign update but evolved into me sitting with some tough questions about the Jewish community’s legacy. Thanks for those of you that choose to join me on this path.

I’m celebrating wins no matter how small they may seem in this time of tragedy and impossible decisions. You may be wondering what the abolitionist raid on Harpers Ferry and the Black Panther Party (BPP) have in common: both are marked in time the weekend on October 15-17, 2021. The formative political organization BPP was founded on Friday in 1966 in response to police brutality against the Black community, specifically the killing of Matthew Johnson in San Francisco. I am celebrating the legacy of the Black Panther Party, whose Free Breakfast for Children Programs became a model for the Fed Up Political Food Distributionin which many CJJ members are currently engaged.

On Saturday, we stepped back further in time to mark the anniversary of the 1859 abolitionist raid on Harpers Ferry. I am celebrating John Brown and company’s brave attempt to take over the United States arsenal at Harpers Ferry, VA (modern day WV) in an effort to initiate a slave revolt across the Southern states. The raid, now seen as a prelude to the Civil War, included 21 additional abolitionists — 14 white and 7 Black. Brown, a white man, was defeated in the raid by a company of the U.S. Marines led by First Lieutenant Israel Greene. Greene, a Jewish man, later left the USMC and served as an officer in the Confederate States Marine Corps during the Civil War.

I’m familiar with Jewish communities celebrating our shared legacy of engaging in tikkun olam or social justice projects. While this heritage of building a more just world is worthy of celebration, I haven’t heard much introspection about a different part of our story — the one in which some of our ancestors fled persecution based on our Jewish identity in Europe, and then essentially traded in their otherness for whiteness. If we understand the Confederacy as a project of maintaining white cultural hegemony, I see First Lieutenant Israel Greene as having chosen assimilation as a survival strategy. The project worked so well for him that he became deputized as a crusader for white dominance.

While I condemn Greene choosing comfort over building a more fair world, in contrast I celebrate the community that we are cultivating within CJJ. We create and allow space to interrogate these nuances while writing a new story for ourselves, one in which we show up as vibrant, dynamic Jews in multiracial, intergenerational, and cross-class coalition within our Southern communities.

The People's Budget NC, which you can read more about at this link, is an example of one of these coalition spaces in which CJJ is engaged. I am celebrating coalition members Surena Johnson and Kathy Greggs who recently led direct actions in Raleigh and Fayetteville respectively, demanding more resources for those experiencing the current housing crisis. Activists camped out overnight on state property demanding greater transparency into the Emergency Rental Assistance Program (ERAP), wanting to know why neighbors facing impending evictions hadn’t yet been approved for funding. I’m celebrating the team in Raleigh who called in help from a local council person after hearing from a neighbor experiencing homelessness that the portable bathrooms available to the public downtown hadn’t been serviced in weeks.

Additionally, in direct response to this day of action, the city council moved to provide more administrative support to the vendor facilitating ERAP that will undoubtedly increase the capacity of the program to meet the needs of our people. I’m also celebrating that the direct action team was able to motivate two apartment complexes to start accepting ERAP funds, preventing the impending eviction of three families who were approved for funds.

We know there is more work to be done and I'm celebrating our community that doesn't shy away from this necessary challenge.

This week’s parashah is Noach, which is ironically fitting, because this shabbat is also being observed as Death Penalty Sabbath by Christian and Jewish congregations in North Carolina.

Why ironic?  I am not going to discuss the familiar stories of the flood, the rainbow, the tower of Babel.  Rather, I am struck by these two verses that appear in Chapter 9:

But for your own life-blood I will require a reckoning;

I will require it of every beast;

of man, too, will I require a reckoning for human life,

of every man for that of his fellow man!

The sage Hillel taught, "Al tifros min hatzibur. Do not separate yourself from the community." That is interpreted by many as a declaration that Jews should vote as one element of their participation in their community. Historically, Jews have been one of the segments in the US population to turn out greater than others. But voting only works if the votes count. How might our votes not count?