What can we expect in the coming weeks and months as related to the most important election in our lifetimes?

As a member of several Jewish social justice and election season coalitions, we at CJJ want to share the best wisdom that is available right now about the election and post-election landscape. Violence is possible when communication is weaponized, but communication can also be leveraged to bring about peace. It matters how we are talking about this pivotal moment in our country.

Our message is simple: "Count Every Vote." Rather than raising the specter of a rigged, or stolen, or fraudulent election, we maintain that democracy is strongest when every vote is counted.

Right now, we are in the midst of what will be a long Election Season. Because our fellow citizens are already voting, and in record numbers, what we know as "Election Day" is simply the last day of voting. It is unlikely that we will know the results of many elections on Nov. 4.

It may take a long time to count every vote, in part because it is estimated that absentee/mail-in ballots will constitute 70% of total votes cast in this election. Absentee ballots are subject to security measures to ensure accuracy, and some states (rightly!) give people a chance to correct problems with absentee ballots. Also, some states can’t begin to count ballots until after the polls close on Election Day. With reduced election staff because of COVID, it may be days or weeks before we know the results of a free and fair election. But any delay caused by counting every vote is a sign that democracy is working! When officials take time to process every ballot, it means every vote is being counted -- and that is a good thing.

As Jews, we have particular investment in counting every vote. Jews are safest when we are acting together in solidarity with other targeted groups; an attempt to create division or chaos or doubt or fear is an intentional strategy to keep us feeling isolated and unsafe. A strong, multiracial, multifaith democracy ensures our freedom. This is our fight: Overall American vote turnout is 53-54%, while American Jewish turnout is estimated to be 85%. We show up, so it is essential that to count every vote so our voices are heard. And as Jews, we have a long history of overcoming challenges -- as a people, we are patient and take a long view of history.

The timeline from now until inauguration consists of three stages, as this graphic demonstrates, and it's important to note that this timeline is standard and is operational every election year. This year, it's especially important to stay committed to being in the process for the long-haul. 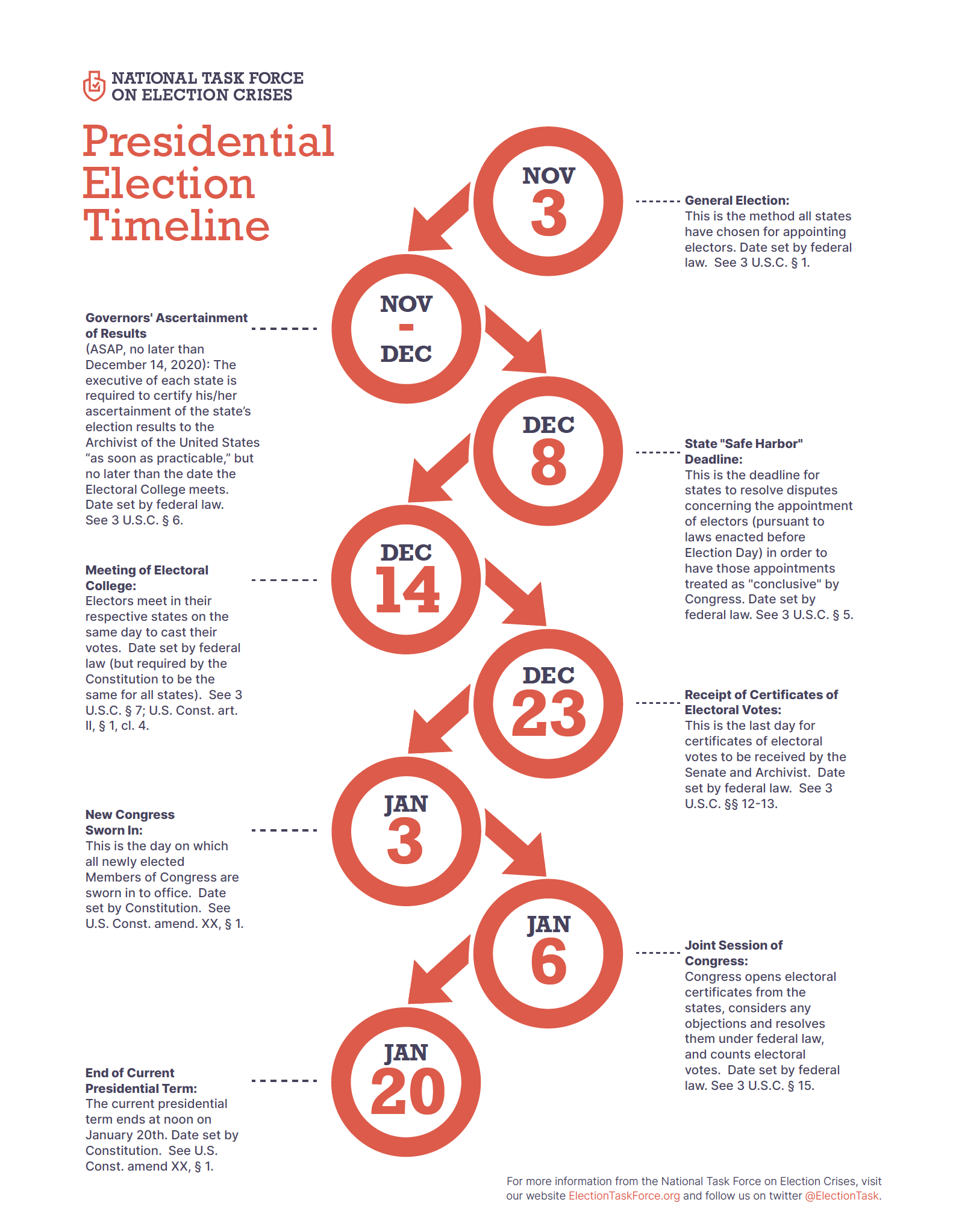 In June 2020 the Transition Integrity Project convened a bipartisan group of over 100 current and former senior government and campaign leaders and other experts in a series of 2020 election crisis scenario planning exercises. You can read the full report here. All scenarios (Ambiguous Result, Clear Biden Win, Clear Trump Win, and Narrow Biden Win) make clear that we should plan for a contested election, perhaps through January 2021, and a disrupted transition period. But the worst outcomes are far from certain, and we can mitigate risk by defending political norms and challenging authoritarian actions in the courts, media, and streets.

There are already signs of hope in record voter turnout for early voting and absentee/mail-in ballots. People are engaged and activated!

As activists, we urge you to pay attention to what sort of reactions you have to different scenarios and messages. Moving forward, we need to be grounded and engaged (not in total chaos!), focused on safety, community, democracy, and other shared values.

Rabbi Shai Held says that the lesson of yetziat Mitzrayim (the exodus from Egypt, the story that we retell at the Passover seder) is that there is no status quo that cannot be overturned. In the darkest of times, we have agency and power.

Carolina Jews for Justice is one of 40+ Jewish organizations closing for Election Day. All staff and many of our leaders will be working the polls. We won't be doing business as usual. Is your synagogue, community center, Jewish group, or Jewish employer also planning to close on election day? Encourage them to do so and to pledge at Free&Fair, a project of the Lippman Kanfer Foundation for Living Torah.